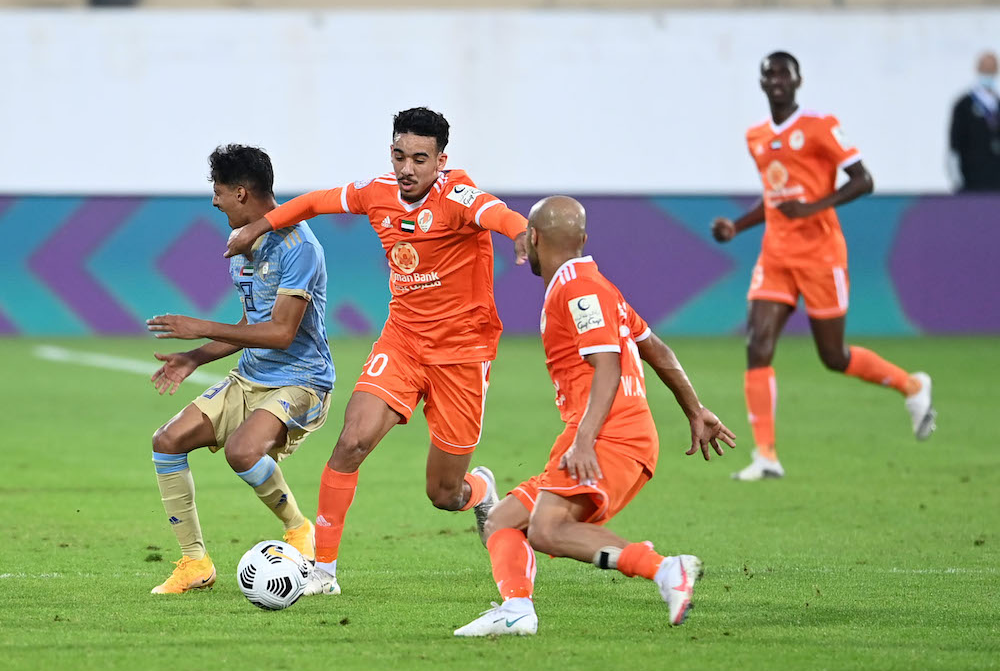 Ajamn came from behind to defeat Al Dhafra 2-1 at Rashid Bin Saeed Stadium in matchweek 14 of the Arabina Gulf League, which is held under the slogan “Together We Recover” in support of the country’s Covid-19 vaccination efforts.

Al Dhafra needed only 8 minutes to break the deadlock, as Pedro Conde capitalized on a defensive mistake to tap the ball past Ajman keeper Ali Al Hosani.

Al Dhafra came close to doubling their lead just after the 20-minute mark when Suhail Al Mansoori’s left-footed effort from outside the box went above the bar.

The second half was a different story, as the Oranges levelled the scoreline only six minutes after the restart. Substitute Husain Abdulrahman headed the ball home off Mohamed Ismail’s cross from the right side.

Ajman continued to push forward in search of a second goal and they eventually found the back of the net, when Modibo Maïga fired the ball over keeper Zayed Al Hammadi to hand his side a 2-1 advantage.

Ajman earned their second win in a row to raise their tally to nine points. On the other hand, Al Dhafra succumbed to their sixth defeat of the season as they remain with 16 points.

A stoppage-time goal from Ben Alarbi guided Ajman to snatch a crucial 1-0 home win over Ittihad Kalba at Rashid bin Saeed Stadium in matchweek ten of...

A stoppage-time penalty allowed Al Wasl to snatch a dramatic 2-1 win at Zabeel Stadium in matchweek nine of the ADNOC Pro League on Saturday.  ...

Caio Lucas scored a penalty in the 87th minute to hand Sharjah a narrow 1-0 win over Al Dhafra in matchweek nine of the ADNOC Pro League on Saturday....