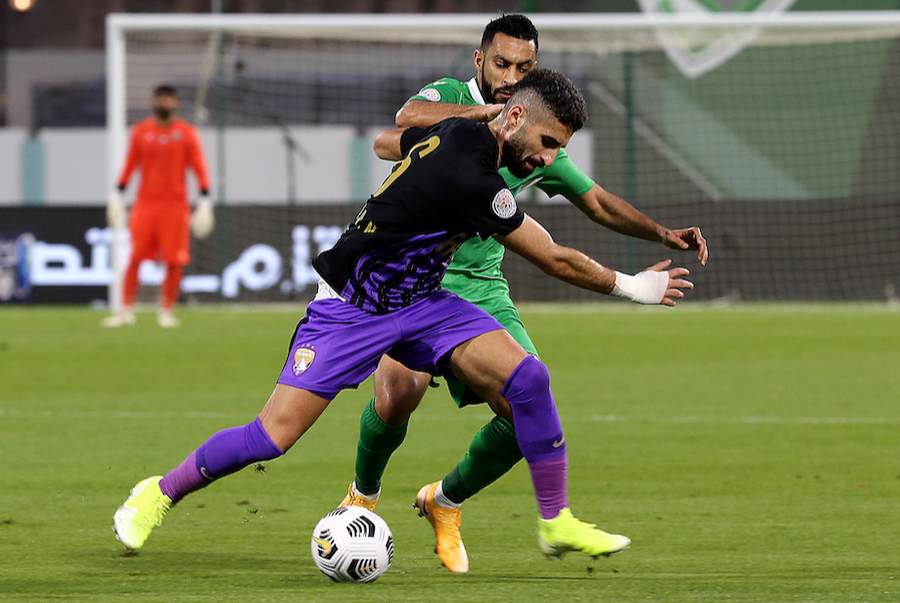 Al Ain were held to a 2-2 draw by Khorfakkan at Saqr Bin Mohammad Al Qassimi Stadium in matchweek 14 of the Arabian Gulf League, which is held under the slogan “Together We Recover” in support of the country’s Covid-19 vaccination efforts.

Bruno Lamas and Omar Juma were involved in an interesting exchange just six minutes into the game, which saw the No.11’s effort blocked by Al Ain keeper Mohamed Bu Sanda.

Al Ain missed an easy chance to break the deadlock just after the 20-minute mark, when Laba Kodjo failed to capitalize on the keeper’s error and had his shot intercepted by the hosts' defence.

Khorfakkan responded quickly and took the lead three minutes later when Ismail Al Hammadi received a long ball and dribbled past the defence, before raiding the Al Ain’s box and firing on the counter.

The hosts missed a valuable opportunity to double their lead 10 minutes before the break, when Ramon Lopes, who was in a one-on-one situation with the keeper, failed to put his foot through the ball.

Khorfakkan were made to rue their missed chance as Al Ain levelled the scoreline less than five minutes later when Tsukasa Shiotani fired a right-footed effort from the edge of the box into the top of the goal, as they headed into halftime deadlocked at 1-1.

The Boss looked more dangerous after the restart, as keeper Abdalla Sanqour pulled off a double save before an effort from Shiotani drilled wide of the post.

Al Ain’s pressure paid off as they took the lead on the one-hour mark, after Bandar Al Ahbabi’s cross found Laba Kodjo inside the box and the latter beat his markers and fired home to make it 2-1.

Khorfakkan needed only eight minutes to restore the draw, when Ramon Lopes crossed the ball inside the box and Raphael Guimaraes 'Dodô' made no mistake tapping home.

Al Ain found the back of the net 15 minutes from time, but Caio Canedo’s header was ruled out for a foul in the buildup. Khorfakkan had a goal also ruled out a minute later for an offside.

Al Ain now have 24 points from six wins and six draws, while Khorfakkan reached the 15-point mark off four wins and three draws.

Khorfakkan faced tough challenges during the 2021-22 ADNOC Pro League season as they had to wait till matchweek 5 to pull off their first win.  ...

Al Ain have achieved excellent numbers during their brilliant adventure towards claiming the 2021-22 ADNOC Pro League title for the 14th time in their...

Shabab Al Ahli have officially claimed the U-21 Pro League title for the second year in a row after crushing Khorfakkan 10-0 in matchweek 26 to end th...

Sharjah and Al Ain end their...