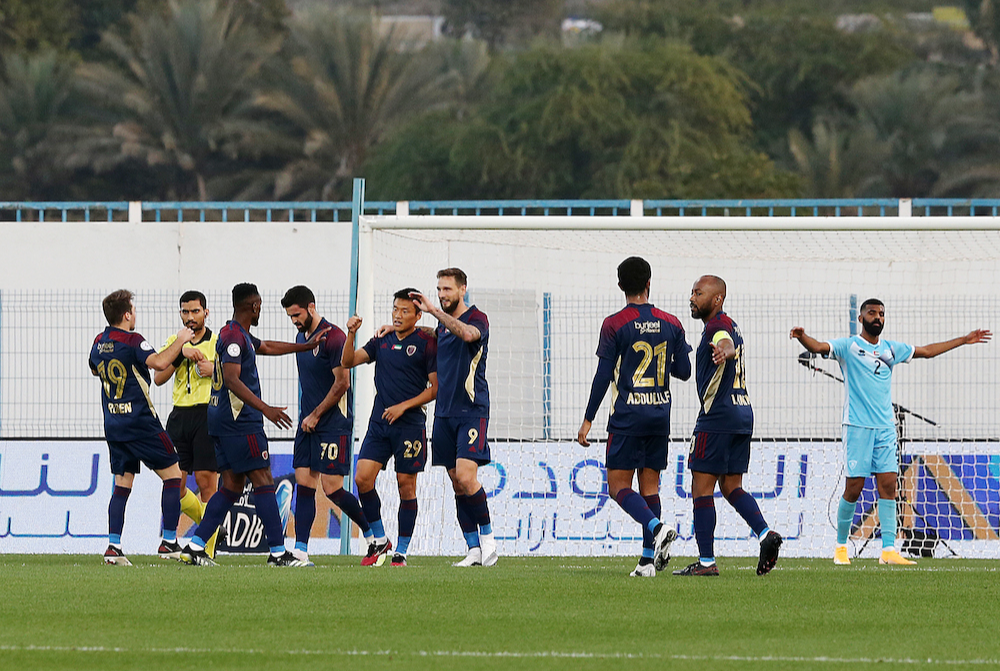 Al Wahda returned to winning ways with a 4-1 victory over Hatta at Hamdan Bin Rashid Al Maktoum Stadium in matchweek 14 of the Arabian Gulf League, which is held under the slogan “Together We Recover” in support of the country’s Covid-19 vaccination efforts.

The first chance of the game came in the 5th minute, when a long-range effort fell into Al Wahda’s box, but was intercepted by keeper Mohamed Alshamsi before Ahmed Malallah could get hold of it.

It was Al Wahda who found the back of the net in the 12th minute. Paul Jose Mpoku launched a counterattack before finding Myung Joo Lee inside the box and the latter tapped home to hand his side 1-0 lead.

The guests doubled their lead 12 minutes later, thanks to Omar Khribin, who headed the ball home off a corner kick to get his name on the scoresheet on his debut with the Clarets.

Habib Yousuf netted a similar goal on the other side of the field, pulling one down for the hosts just after the half-hour mark.

The guests, however, managed to restore their two-goal lead. Khribin turned from scorer to provider as his through pass found Tim Matavz who sent the ball past Hatta keeper Ahmed Mahmoud.

Khribin completed his brace 20 minutes from time, as he scored an audacious Panenka penalty to make it 4-1 and put the win beyond any doubt.

Al Wahda raised their tally to 22 points after collecting their sixth win of the season. Meanwhile, Hatta remain winless and continue to linger at the bottom of the standings on two points.

Al Wahda had a great start to their 2021-22 ADNOC Pro League season as they kicked off their campaign with a 4-0 win over Al Orooba in matchweek 1, bu...

Al Wahda and Al Nasr played out a 2-2 draw at Al Nahyan Stadium in the final Matchweek 26 of the ADNOC Pro League on Wednesday.     &nbsp...

Five-Star Al Ain Bright on a...

Ajman and Al Wahda shared the points in an encounter that finished 2-2 at the Rashid bin Saeed stadium in matchweek 23 of the ADNOC Pro League. &nbsp...