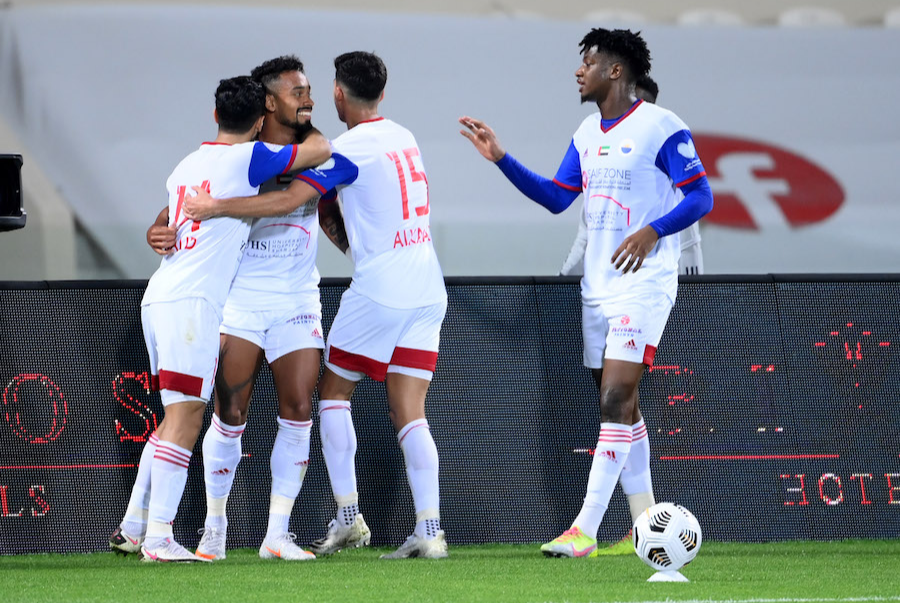 Sharjah consolidate position at top with 3-2 win over Fujairah

Sharjah survived a late scare to beat Fujairah 3-2 at home in matchweek 14 of the Arabian Gulf League, which is held under the slogan “Together We Recover” in support of the country’s Covid-19 vaccination efforts.

Caio Lucas opened the scoring for the King seven minutes before the break, as his header took a deflection off the Fujairah defender and went into the back of the net.

Ten minutes after the restart, Igor Coronado got his name on the scoresheet and doubled Sharjah’s lead, when his was released on a counterattack and the Brazilian midfielder lobbed the ball over the keeper to make it 2-0.

Coronado completed his brace and further extended Sharjah’s lead just after the one-hour mark, as he converted from the spot into the bottom corner of the net.

Fujairah reduced the deficit seven minutes later, when they were awarded a penalty kick. Samuel Armenteros stepped up scored from the spot and fired home.

Alvaro de Oliveira made it 3-2 in the 81st minute, as he found Mutau Owolabi’s cross inside the box before sending a powerful strike past keeper Adel Al Hosani.

Fujairah went looking for the equalizer in the remaining minutes but couldn’t complete their comeback, as the King emerged 3-2 winners.

Sharjah remain at the top of the standings with 35 points, while Fujairah dropped to 13th place on seven points.

Sharjah … A Strong Start and...

Sharjah kicked off their strong campaign in the 2021-22 ADNOC Pro League with three consecutive wins, before losing five games, and drawing in four ma...

Five-Star Al Ain Bright on a...

Sharjah Move up to Second af...

Otabek Shukurov struck twice as Sharjah cruised to a 3-1 home win over Khorfakkan in matchweek 23 of the ADNOC Pro League on Tuesday.    ...

Sharjah managed a 2-1 win against Al Wahda, and in that they gifted Al Ain some breathing space at the top of the table in matchweek 22 of the ADNOC P...