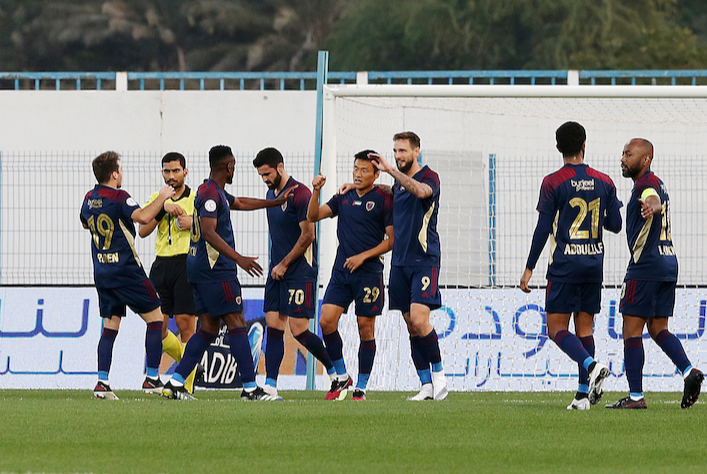 After a strong start to the second half of the season, another great weekend for Arabian Gulf League action is upon us. Matchweek 15, which is held under the slogan "Human Fraternity" in celebration of the Human Fraternity Festival, is filled with intriguing matchups that should offer plenty of entertainment for fans.

After falling to a 2-0 defeat to Al Wasl last week, Bani Yas will be looking to return to winning ways when they host Fujairah at 5:30pm. The Sky Blues need the win in order to keep their spot in the top three, as they now sit third on 26 points, two above fourth-placed Al Ain.

Fujairah will also be looking to grab a positive result in hopes of escaping the relegation zone after falling to a 3-2 defeat to Sharjah, which saw them drop to 13th place on seven points. They will, however, face an uphill task as Bani Yas remain undefeated against Fujairah in the league (4 wins - 3 draws)

Al Maktoum stadium will host Al Nasr and Khorfakkan game at the same time. The Blues need to bounce back after their 3-0 defeat to Al Jazira, which saw them drop to fifth place on 24 points. On the other hand, Khorfakkan will be looking to keep the momentum alive after beating Al Jazira and drawing with Al Ain to continue their march towards safety as they now sit 11th place on 15 points.

The King, who survived a late scare against Fujairah, will be looking to maintain their winning run when they clash with Al Wahda at Al Nahyan Stadium at 8:15pm to further consolidate their position at the top.

On the other hand, Al Wahda will look to keep the momentum alive after their 4-1 win over Hatta, as the Clarets unbalanced performances this season left them in 7th place on 22 points.

Sharjah enter the game with a slight edge after earning three consecutive wins over Al Wahda in the Arabian Gulf League.