Arabian Gulf Super Cup to be held on January 22nd

Matchweek 13 rescheduled at request of the UAE Football Association

The UAE Pro League Technical Committee held on Thursday, December 17th, its fifth periodic meeting for the 2020-2021 season via video conferencing. The meeting was headed by UAEPL Board Member and Chairman of the Technical Committee Hassan Taleb Al Marri and was attended by all board members.

The committee discussed the upcoming challenges, topped with the AFC not determining the AFC Champions League competition system as well as the fixtures dates, after postponing it to April 2021. In addition, the committee also discussed the national team training camps, as the Technical Committee was keen to provide full support for the national team’s technical staff and the National Teams Committee.

The Technical Committee announced a number of decisions, including adopting the winter time starting matcheek 12 of the Arabian Gulf League, as the first set of matches will be held at 5pm, while the second set of games will then kick off at 8pm.

Matchweek 13 of the Arabian Gulf League was also rescheduled to January 15th and 16th instead of its initial date on January 4th and 5th at the request of the UAE Football Association, as the national team training camp will be held between January 2nd and 12th, 2021.

The committee announced that the first leg of the Arabian Gulf Cup quarterfinal will be held on January 7th and 8th, while the second leg will take place on January 25th and 26th.

The Arabian Gulf Super Cup between Sharjah and Shabab Al Ahli will be held on January 22nd at Al Maktoum Stadium in Al Nasr Club.

The Technical Committee announced the kick-off date of the second half of the Arabian Gulf League season, as matchweek 14 will be held on January 29th and 30th, and the full schedule will be announced as soon as the AFC sets the dates for the AFC Champions League competition. 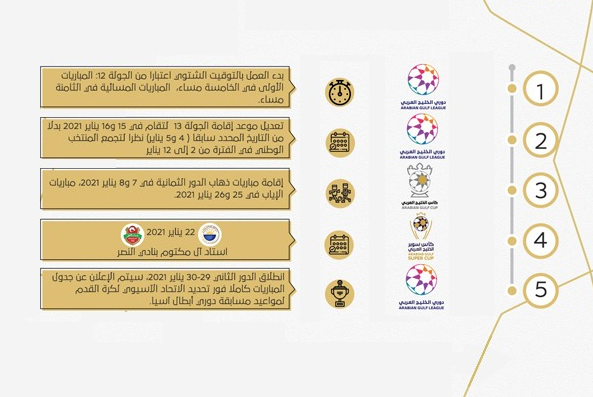 Gabriel De Souza grabbed a brace to grant Al Wasl a 2-1 away win over Al Nasr at Al Maktoum Stadium in Matchweek four of the ADNOC Pro League on Satur...

A goal from Isam Faiz and a brace from Waleed Azaro helped Ajman secure a 3-1 comfortable victory over Dibba in matchweek four of the ADNOC Pro League...

A stoppage-time goal from Sasa Ivkovic guided Bani Yas to snatch a crucial 1-1 draw against Al Jazira and ended the Pride of Abu Dhabi's 100% start to...

Sharjah maintained their leading position at the ADNOC Pro League as an outstanding display overpowered Khorfakkan 3-0 in matchweek 4 at Sharjah Stadi...